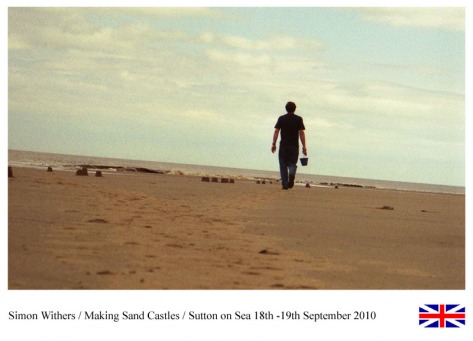 ‘Making Sand Castles’ took place on the beach at Sutton on Sea and commenced as the tide began to retreat. I started to make sand castles using a child’s plastic bucket and spade (1). Each new castle was be made using sand (2) that had been dug out from a single sand pit. This pit was my starting point and return point. The work continued until the tide turned and began to destroy my castles as the sea re-claimed the beach. During the action the public were invited to write a seaside memory upon paper flags (3). As I returned to my starting point to collect the sand and fill the bucket I collected a flag and inserted it into a sandcastle.

Making Sand Castles makes connections with the unique character of the East Coast resort, (the sea wall defenses, the beach huts & traditional seaside activities). The work is conceived purely out of my responses to the specific Sutton on Sea location. Making Sand Castles is a discipline and by nature is conceived to be a form ‘extreme sandcastle building’. It is constructed to work with the natural forces of the tide and echoes and reverberates with the local character.

From the shoreline Sutton on Sea is represented by a concrete sea wall with a line of diminutive beach huts perched on top of and along its girth. This defence and the later sand defence dredged up from the Wash to protect the concrete wall is all that protects the town and surrounding area from the powerful nature of the sea. All this defensive work is in place to prevent the recurrence of the 1953 floods when the wall at Acre gap was breached, lives were lost, homes destroyed, livestock floated in the sea and two Sherman tanks were employed to plug the hole.

This work is a direct response to the nature of the environment. The concrete and sand sea defenses and the little town that sits below the defense influence the work. The human element is important in carrying out this work. Not only is the human creating and leaving traces, the person is also working with time. This is the period between the fall and the rise of the tide and the task undertaken between these two events. There is the idea that one is ‘playing’ out time and my time on the beach is a metaphor for man vs. nature and a wildness that threatens to engulf us. I am thinking about Canute who far from demonstrating that he could hold back the tide, sat upon his throne facing the tide to show that we are not invincible to the mighty waves.

(1)The bucket and spade used by the artist was deemed appropriate for use, the items were purchased from one of the beach shops at Sutton on Sea. The items are ones regularly used on the beach by bucket and spade consumers.
(2) Using sand that is regularly dredged up from the wash. It is used to reinforce the sea defenses. This form of Sea defense replaced the groynes that were intrinsic to the character of Sutton on Sea and surrounding area.
(3) Each castle thereafter has individual ownership.

In 2000 I undertook a Year of the Artist residency in the Lincolnshire Coastal resort of Sutton on Sea. This modest seaside town is a place that I visited regularly with my parents throughout the 1970’s for our family holidays. By the late 1970’s as ‘we’ the children grew up and our family interests changed helped in part by a healthier standard of living, so the lure of affordable package holidays to exotic foreign destinations became the family choice. The caravan was sold and Sutton on Sea became part of family history and consigned to memory…yet I next returned to Sutton on Sea in 1988 for a final degree shows project, this was to take a group of friends to Sutton to help me create a sand installation called ‘Furrows.’ It was to be a further ten years before I would really look anew at Sutton on Sea and the surrounding town that I knew as a child. Whilst I walked along the seafront at Sutton in 2000 I looked at the derelict state of the beach huts and the beach that was now groyne-less. I quickly saw that there could be potential to develop my own residency for the Year of the Artist programme. At the cusp of the new millennium I had the opportunity to undertake a rediscovery of this place of memory.

As part of my residency in 2000 I began to make sandcastles anew, there had been a point where I must have simply stopped making them, somewhere between childhood and early adolescence. The first new sandcastle was a wonderful moment of rediscovery and marked a point where I reconnected with the beach. I used a period of my residency to experiment on the beach, making sand maps of Sutton on Sea and making a series of environmental interventions by coloring the sand and coloring the water with child friendly powder paint. Some sand castles contained colored pigment so when a wave washed over it and the sand castle began to split; the castle would spill out its colored contaminant into the sea. One of my sand castle experiments was the undertaking of a time-based work and ‘Making Sand Castles’ a one-hour durational work was the outcome. The tide turned and washed away the labor and on that day connections were formed. 2010 marks the tenth anniversary of my SOS residency…it is fitting therefore that I can finally realise the project as originally envisaged…sometimes things take a long time to come to fruition.


Simon hired a beach chalet along the Sutton on Sea promenade and presented some of the work he made for the original residency in 2000 incorporating props made for the short film ‘A postcard from Sutton on Sea’ made on location with filmmaker Steve Friendship. I was pleased that Steve was able to come to Sutton and we gave a couple of showings of our film to the public outside the beach hut.

The Artist produced a series of three postcards for the project and these were available during the festival.
​
*Due to the Tide Times this late on in the year the Artist worked between the LW time point and the HW times…this was reversal of my original plan…I was working both against and with Nature!