‘The Cafe to die for’ at eight thirty is full of diners. The waiters in white smocks serve food from heavy silver platters. Conversation is lively on every table. Money, fashion, affairs of the heart, personal and forceful opinions are expressed during the course of the evening. The meals are luxuriously presented and the temperature of wine is satisfyingly attained. Occasionally diners can be witnessed looking at the large mirrors hanging from the walls above them. Some of these mirrors are angled to catch the light and the reflections of the diners themselves. A gentleman catches his own reflection, he takes a napkin to his lips to dab away the slightest speck of caviar from the side of his mouth. Guests from different tables catch each other's eye. A lady in a seductive black dress runs a finger down the seam of the dress fissure on to her flesh down her thigh to the calf; Full Stop. The gentleman tries to avert his gaze from the woman’s act. She returns to the conversation at her table. The gentleman looks deeper into the reflection, his eyes affix the top quadrant of the mirror. Reflected in the mirror is the cafe balcony. This is aloft of the restaurant arena. A jazz band plays high in the gods. They perform music for meals. Occasionally the amplified sound of the diners themselves provide the ambience for the music constructed.


Channel hopping, news, sport, documentary, soaps, a quiz? Films, music, children’s television, home style or Mean Time? ‘What’s that? asked Lasco Fulmar. ‘Take a seat, like a beer?’ ‘Yes please.’ Jenson Smith hands Lasco Fulmar a cool can of beer. Jenson Smith sits down on the chintz pattern sofa and picks up the remote control to key in a new set of command numbers. 3, 1, 9 and 0. The channel jumps from Sky Sports Plus to Mean Time. ‘What’s this Jenson, I’ve never seen this station before, no station has a four digit number, It's not in English, what language is it in Smithy? , who the hell is it Smithy?, what is it Smithy? seconds later , ‘Smithy, Smithy this is not of this Earth!’ (A short overture)

Peering out from behind screened windows, brother Tom and sister Jane live in a world of punctured light. They dwell in a vast building of one hundred rooms. The building dominates the surrounding houses and flats. Peeping Tom and Peeping Jane pass the days and nights surveying the rooms of their neighbours through the Small holes drilled into the shutters. What Tom and Jane see through their peephole world they record upon the internal walls of their realm. ​


St Gennaro infant School was celebrating the centenary of its foundation. The Headmaster, Thomas Athelstone made his way down the schools main corridor towards the trophy cabinet. He pulled out his keys and unlocked the cabinet's glass fronted doors. Thomas Athelstone took a firm hold of the old school bell and removed it from the cabinet. He looked at the tarnished electro plated bell and at the inscription etched into the surface. ‘Bell, here now bringeth our children to call’ Thomas Athelstone rubbed his finger into the inscription. He returned to his office to give it a deft clean, it was still fifteen minutes before the end of the mornings break time.

The bell had not been used since 1974 and had remained in the trophy cabinet since therewith. On this special centenary day the school governors had invited the local newspapers and television to the school to share in the days' festivities. Thomas Athelstone inspected his handy work with the polishing cloth on the old school bell. Its brilliance had returned, Thomas noticed a slight crack along the bell's edge. ‘It will survive one last ring’ he thought. Thomas Athelstone made his way towards the playground and the awaiting press, honoured guests, teachers and children. At 11.00am precisely, Thomas Athelstone rang the bell to bring the children to call. The bells’ tones not only yielded the children to it’s bidding, it also raised the spirits and phantoms of the schools old dead.

Follicker was taken away in a black maria so Pa said. He got a right good hi’din from the shop keeper for trying to molest Miss Pelham. You should have seen Mr Lockjaw pullin Follicker out into the street. He had him by his own belt strap, his pants around his ankles. Mr Lockjaw’s white coat was flappin’ in the breeze. He looked like an avenging angel said Mrs Lovelace. She saw the whole thing. Pa was there too, he brought home a fresh chicken from Mr Laxity, the butcher whose shop is next door. Pa saw it, that’s how we knew about Follicker being taken away by a black maria.


Helena took a meander into the garden to admire the roses. Helena walked through the olive groves which gave cover from the midday sun. It was high summer and the Italian garden was being prepared for Helena’s summer feast. Helena carried with her a new ten-mega pixels digital camera. Helena stopped at the edge of her luscious verdant lawn. Helena held the camera up to her eye to view the house through the camera’s lens. She needed more distance...she walked backwards, and took one step sideways, her eyes still focused through the lens finder.  Helena took another step back...then another. Suddenly the moist grass began to split beneath her. Helena sank though the turf. Helena had no time to utter a distress call or to take a photograph. The ground swallowed her whole. Helena had been digested into the belly of Leonardo’s lost gigantic bronze cast horse. 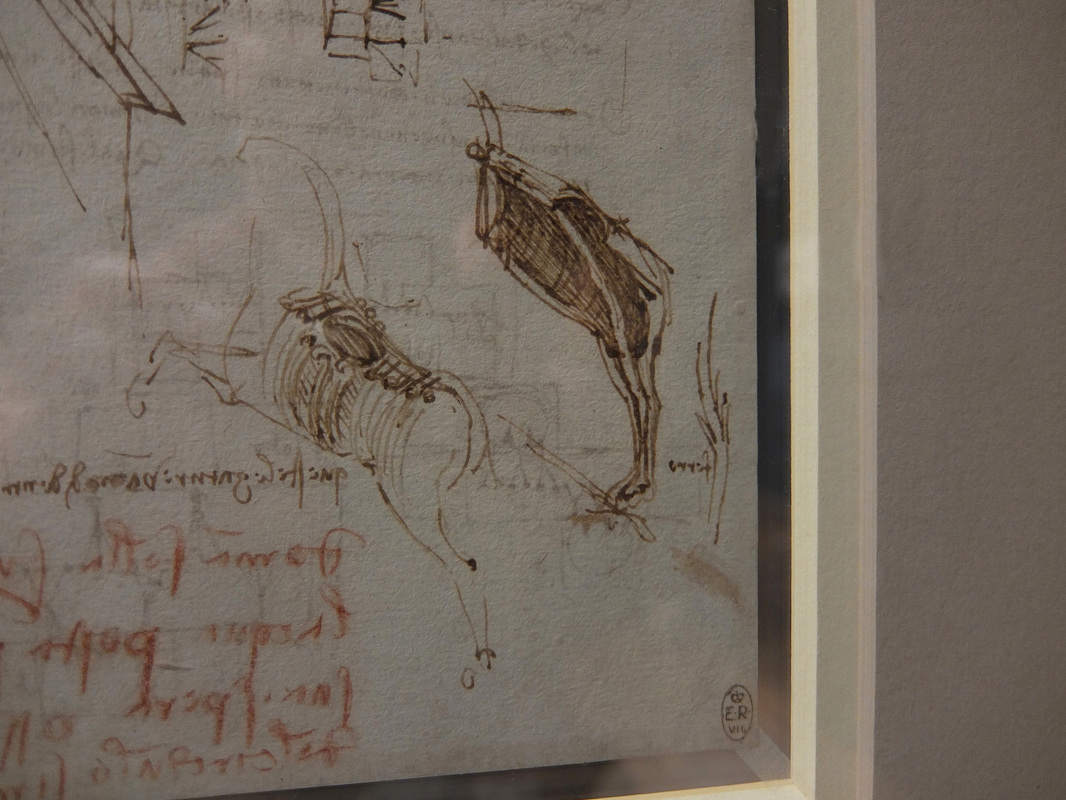