stories from nana roosie - Establishing fiction from truisms through story telling in myth and Fable.

The two fishermen are dressed in easygoing western dress, they hoist aloft their joint ‘prize catch.’ (This image was originally taken from a newspaper. It was a ‘No news day’ - Images of furry animals were upon the covers of the broadsheet newspapers.  What’s the story - unimportant, Caption to image - unimportant) the image during transformation has deliberately been decapitated. One of the fishermen has no feet. The Catch, the big fish is decapitated; it is reduced to a small fish. Yet the proud, grinning fishermen hold on to their catch. In close association upon the canvas, a large imposing pineal head casts his eyes over the meagre hunters. ‘Man fell under the law of the short life and divinity within him died. Man turned to idolatry and mixed with the beast. In Bacchanals man recognises this aspect and apes the beast.’ (1) Sending out commingled messages and establishing fiction to relay truisms through story telling in myth and in fable. To interpret, to lead, to suggest and to open possibilities without determining any judgement or truth.
‘While I dwell, painting with wool, building up the colours that forms the face, he sits in a confined windowless room at a secret location playing with his interrogators.’ (2)

Stories from nana roosie - Dionisio. The pure fire that transforms to light.  From the Earth Mother the light is transformed through the work of the alchemist. Internally it is the possession of Freewill.

The first tapestry, ‘Stories from nana roosie’ may look like it is exhibited back to front. The tapestry was made and conceived in this way. The rejection of the imagery as subject is surrendered to the interest in the material as the abstracted subject matter. This has deftly and deliberately been allowed to mat, to confuse, to snag, to interweave, to layer, to build, to construct and to form. The labour and the shear graft through diligent repetitious procedures are serene; the expenditure of energy is with purpose. Hand and eye coordination work with a precision instrument. The steel needle worn by acid fingers is testament to virtuous activity.

‘Dionisio’ takes a pre printed sugary image of a young girl with her pets, eyes focused expectantly toward an egg in an eggcup. This work continues to develop aspects of the aforementioned work. The method of tapestry exists on the reverse side only. On this occasion the tapestry appears on the side that is not immediately visible, I have fashioned the egg like form but on this occasion the wool explodes on the viewing side.

‘The Garden’ explores additional considerations as to how the surfaces can be read and interpreted. On the reverse side a more standard image has been rendered as defined by a printed tapestry kit. The making of the actual image had been on this occasion made up as a means to the end. The reverse side during the making of this work had been my constant consideration. In this work the material loops over the frame and penetrates the reverse (previously the front). The serpent form envelops the underside. The upper side reflects a garden in chaos and I use the wool in explorative ways to describe the chaos. This has been undertaken primarily in a physical way rather than using the wool merely to develop the work pictorially (as usually applied in creating tapestry, embroidery).

‘Penelope’ has been made using an array of white wools to create a blank landscape and the actual image has been obscured and obliterated. The reverse side receives similar attention to the aforementioned works. In the Penelope work however there are strands of wool that begin to hang down from the surface, akin to stalactite forms. In this work the manufacture of the original print name has become the title of the work.

The nana roosie works I believe do not position themselves as adhering to traditional tapestry. I use the term somewhat confrontationally as the works use the method of tapestry as a starting point. Several of the tapestries use an array of different wools in their construction and not all of these wools are normally used in tapestry making.

The work divulges all constituent parts; they are exhibited and splayed upon the scaffolding of their construction. This is integral to the exhibition of the work. The artwork becomes an object of domesticity and conceivably a comforting work in progress, is there no question of finishing? ‘and should the artwork be bequeathed to new industrious hands, is their will toward the tapestry to re-commence with it. Should this happen, are they creating and developing the work or destroying it?’ (3) The raw space of the weft and the weave suggests a continuation. The image can be scrolled through, forwards or backwards like some rudimentary fax machine. The images are of the ‘now’ yet in time the images may lose their relevance, the decline of the familiar. Is their sufficient information contained in the image to keep the narrative alive? Is it all just history, layer upon layer?

Nana Roosie - Died in 1955 at the rumoured age of 110. Lived in Teheran, Iran. Teller of Persian tales. It is said that Nana Roosie never repeated the same story twice.

Additional Notes from ‘Stories from nana roosie’
Simon Withers undermines our expectations of tapestry as a demure pastime. The smooth surfaces of the work hide an underside of tangled threads that form disturbing growths, or reveal a troubling subject matter.
(dis)comfort catalogue 2005

Withers tells the folk tales of our own time. They are appropriately and necessarily alarmingly irrational.
Robert Clark mere jelly catalogue 2004

A major influence in the construction of these tapestries is derived from the rugs/carpets made by Afghan tribes during the Soviet occupation of Afghanistan during the 1980’s. (I am an owner of a first generation rug from this period.) The rug has woven into the design (instead of traditional motifs) hand grenades, Soviet troop carriers, attack helicopters and land mines. The designs are considered to be very stylised for the period (relative to traditional rug designs), however I believe that they should be viewed in context of the times and perceived as the development of a new language. These rugs have strong contemporary art sensibilities.’ The Russian occupation of Afghanistan had been undertaken with no exit strategy in mind. The Soviet forces became entrenched and stalemate ensued, this facilitated ‘more time’ (duration of conflict) toward rug adaptation and development. The designs were improved upon over time and greater intricacy of detail woven into them. With this maturity came greater interest from the outside world and demand increased, both economically and culturally the rugs became dollar commodities. (They may even have helped finance the war effort) I speculate as to whether current Afghan rugs are continuing to develop a new language. Is the current occupation of the country by UN coalition forces influencing rug design?

There is I believe a developing craft dialogue is being fashioned. This I suggest shall aid craft status within the hegemony of contemporary fine art practice. The words ’Craftism’ and ’Future Craft’ hint at a new direction for the movement. It is possible that the rise of new technologies and mega craft shops have contributed to both the development of and the popularity of the medium. Craft I believe has gone urban and the focus is no longer nostalgic or comforting. The urban incarnations embrace the political and the ironic; the work is being no means pastoral.

Contemporary craft sensibilities I believe no longer are the reaffirmations of place, the Afghan Rug testifies to this. Where once craft may have been akin to traditions, stable, singular, authoritative, collectively truthful and rooted to the good earth; so craft can no longer be so validated by tradition. Craft is being developed and reinterpreted. The Fine Art practitioner that looks to craft for a particular material language may well seek to play with the meaning of that language. Stories from nana roosie play with ambiguities triggered by age-old materials.

The nana roosie tapestries become emblematic within the contemporary ‘survivalists’ position, a position where we are increasingly self-aware and yet made anxious by the world around us. The nana works are strategic and sustainable both in relation to the manufacturer of the craft and to the autonomous individual who makes the craft, ‘I’ who validates the world. The nana roosie works are placed between these two positions. 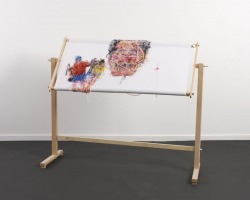 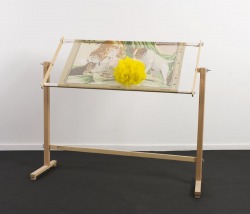 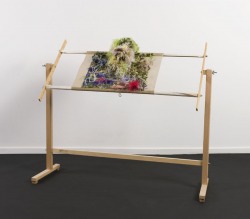 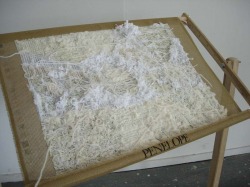