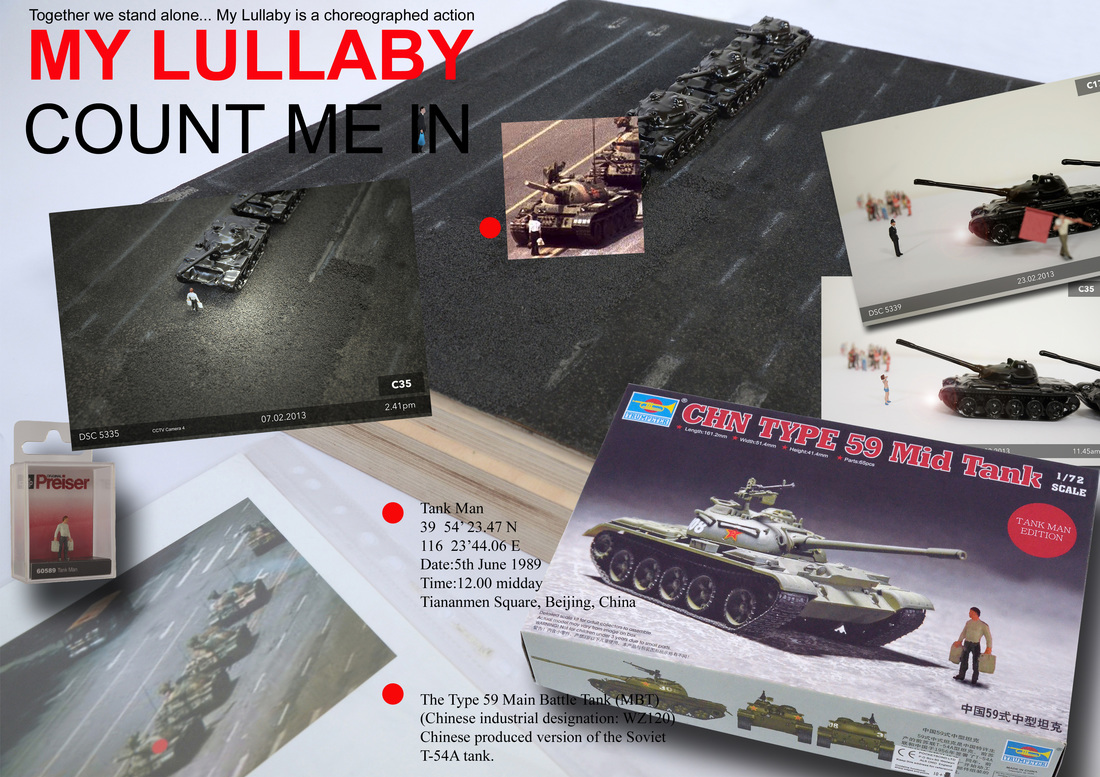 My lullaby is a participatory installation. The work shall be situated in a City street* where members of the public are invited to position themselves in front of a line of four black inflatable military tanks while the event is streamed live on the Internet.
​
*Additional option is within a gallery or other cavernous space.

2019 marks the 30th Anniversary of the Tank Man incident.

On the morning of June 5th, 1989 the photographer Jeff Widener stood on the rooftop of the Beijing Hotel looking down over the enormous Tiananmen Square. He was amongst four press photographers’ taking images of the pro-democracy demonstrations. ‘Suddenly, some guy in a white shirt runs out in front and damn it – that guy’s going to screw up my composition.’

It has been several decades since the iconic photographs of the skinny looking gentleman waving two shopping bags, stood at the head of a column of Chinese Type 59 tanks. The name and eventual fate of ‘Tank Man’ remains unknown. The man’s single act continues to be the subject of speculation; there is no evidence to conclude that he was definitely demonstrating against the government or whether it was a spontaneous act in extraordinary circumstances; there is a further possibility that he was a plant by the Chinese to show the People’s Army’s restraint.

Imagine a family arrives at a specific City Centre location. It could be Maid Marian Way, Nottingham or equally any other large open street in the UK; for example The Mall in London. Our family reaches a marshaling point and receives instructions. The two children ask mum and dad if they could have four of the specially produced carrier bags; one of the children walks up to a volunteer who possesses them and attains a brace of bags. After a few moments the family joins the queue. The family is not the first in line; ahead of them one observes the whole gamut of society and not unlike ‘Tank Man’ some people dress as if they have either just come from the office (dressed in white shirt and black trousers) and/or may have come prepared for a ‘Tank Man’ re-enactment. Many people in the line also have their own branded shopping bags; perhaps this is either by strategy or is it quite possible that some of these individuals may simply be carrying their shopping.

It is difficult to ascertain what any individual may be thinking as they near the vanguard. At the final marshalling point our family are asked to be accountable for themselves 1, the line of many now becomes about one…. as a single person you lead from the front; you wait. You observe; in front of you the street is empty of civilian and automobile, it is eerily quiet.  At the designated moment the marshal dispatches you to proceed forward. Unassisted you walk towards the end of the ‘shepherding street’ and turning the corner (where the two roads join) you enter Maid Marian Way. The sense of personal isolation is acute; it is rare that any individual will ever encounter a busy thoroughfare completely deserted.  Perhaps unaware to you, you are being observed from overhead, the My Lullaby project crew has installed a series of discrete CCTV cameras on surrounding buildings. These cameras steam live footage to the dedicated project website.

Looking down Maid Marian Way you see ahead (about 40 meters away) and occupying the middle of the road are four life size black rubber inflatable tanks. There is an unshakable moment of certainty; you become the subject and the focus of attention…you walk forward towards the lead tank. As active Citizen Participants or as Citizen observers we may well be watching your act on screen. As we watch the figure approaching the tanks we wonder if you are inadvertently acting and we ask; how daring are you? As your moment unfolds you keep us guessing...how long will you remain in their malevolent presence?

My Lullaby is the second of a series of ambitious ‘inflated’ site-specific projects that I am interested in pursuing (The first is the ‘March of Silence’ hot air balloon project and thirdly ‘Heavy Air’, a proposal for the discrete placement of a life sized inflated rubber B2 spirit bomber sandwiched or crammed between two buildings). The focus of attention in the ‘My Lullaby’ project concerns the idea of the ‘collective individual’ and thereafter what possible relationships can be formed between participant and observer. Whilst thinking about the project proposal I have started to make notes of a more contextual nature; perhaps these notes will form the basis of some more detailed writings as the project develops and evolves. There is perhaps time to think about the nature of the transcendence of the image but I think it is suffice to say at this point in time the ‘Tank Man’* image reflects my interest in perceptions in relation to the ‘iconic image’, I have explored this subject previously in other artwork (Folk Songs a series of decoupage collages). I am interested in re-enactments and the notion of values, individualism, liberation, human rights, liberty, equality, the rule of law, democracy and free markets (represented in this project by the carrier bag)…each person is an end product and in ‘My Lullaby’ they slip from being passive subjects into becoming active citizens.

There are various mechanisms that will need to be considered in order to realise this project. There is the logistics of finding appropriate tank fabricators, recruitment of the volunteers and importantly liaising with all appropriate authorities. Additionally there will be a number of technical elements that need to be addressed such as setting up a CCTV system.

1. In reality I would expect that an adult would accompany children.

* Known and labelled by me as ‘Carrier Bag Man’ 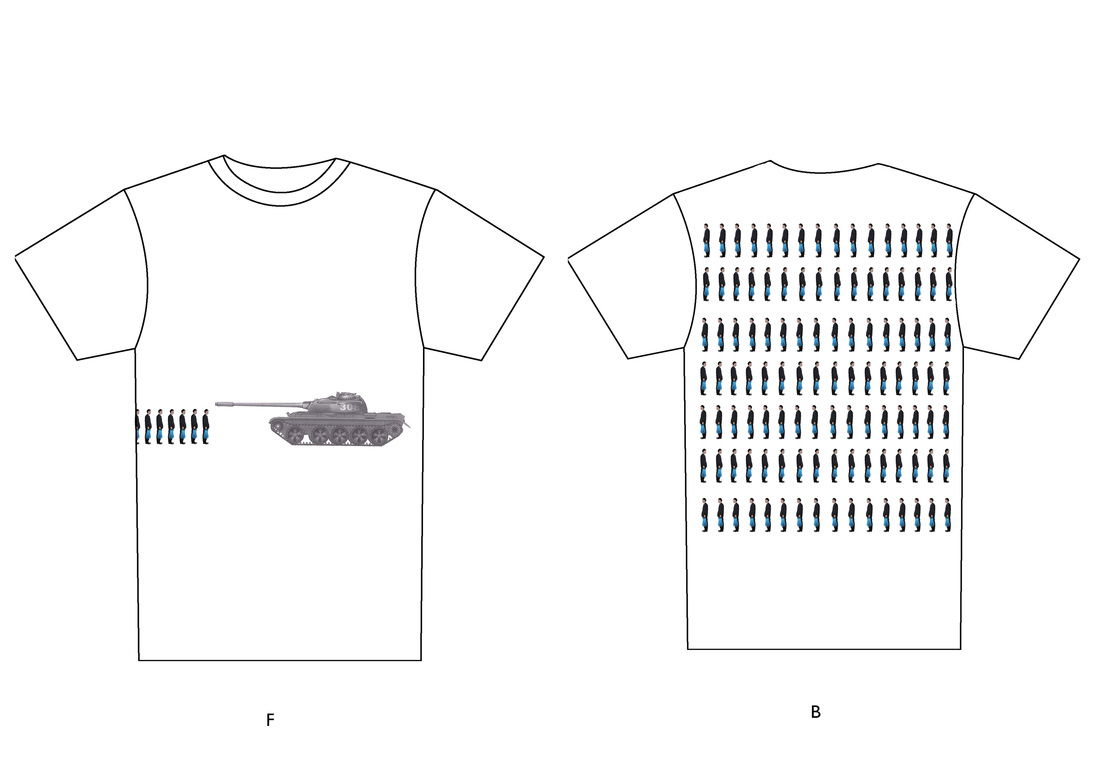 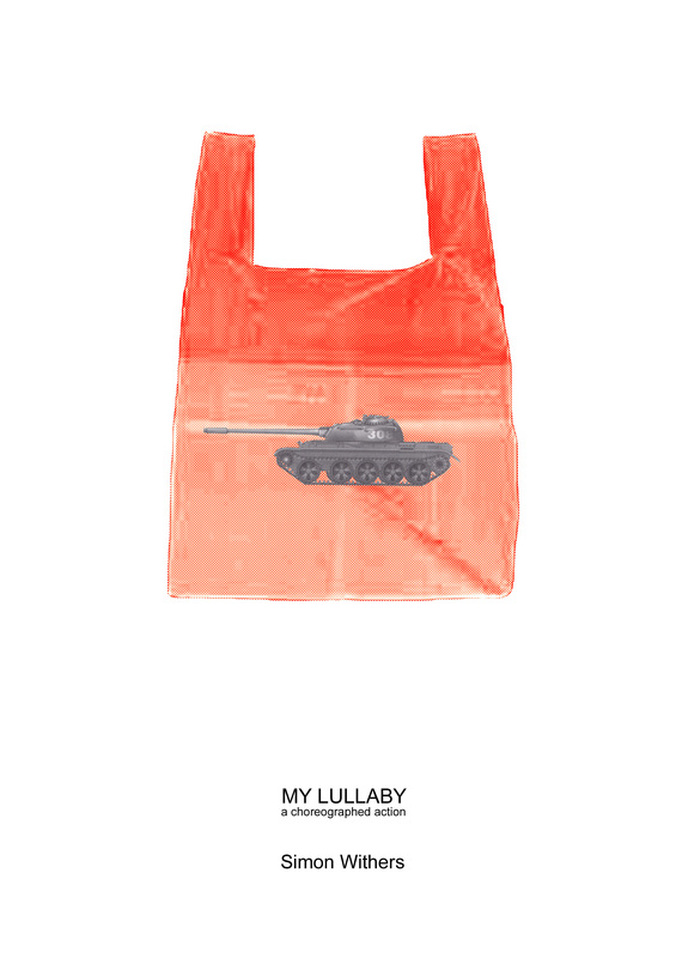 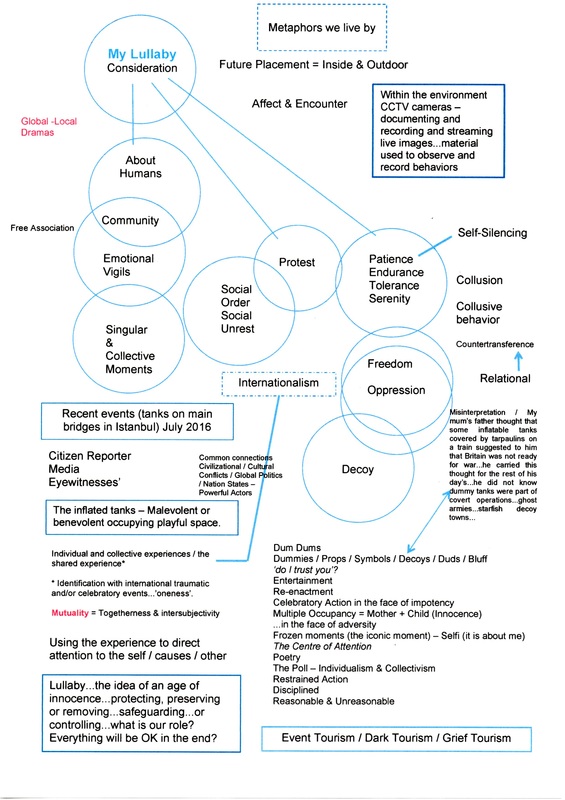 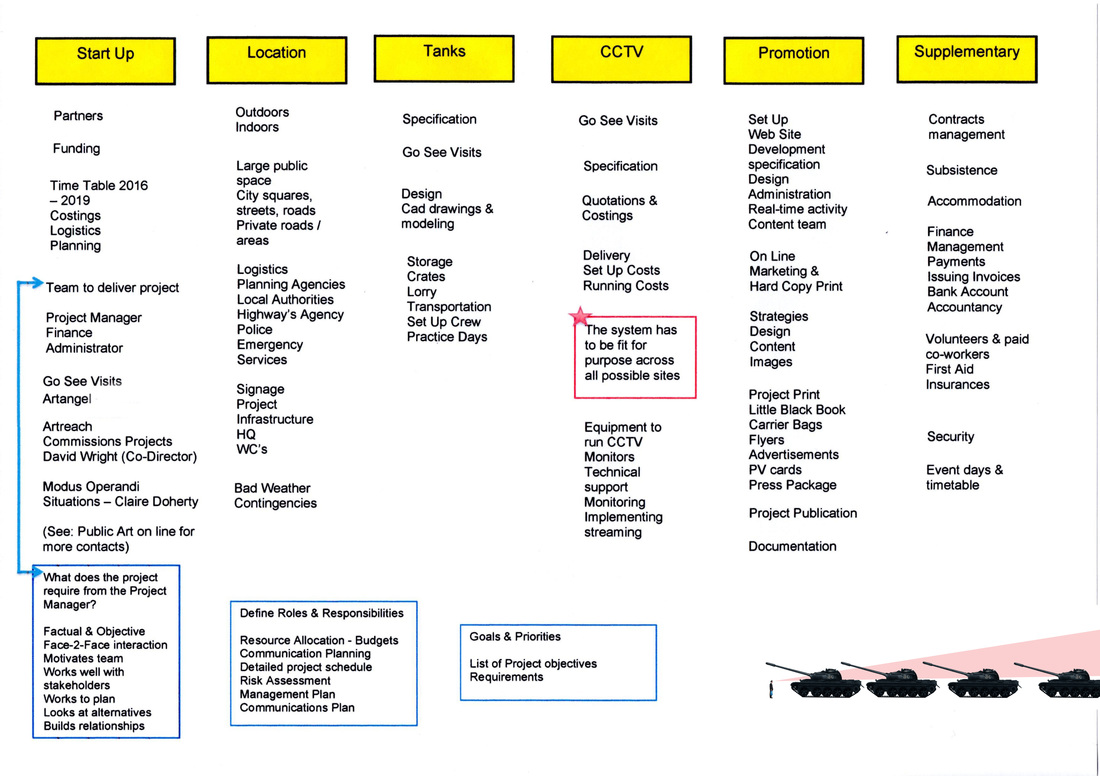 THAT WHICH IS HARD SHALL NOT TRIUMPH

KIND TO THE PRESENT

WHO LIVES / WHO DIES
A QUESTION OF BALANCE


A WORK ABOUT PEOPLE

PRESENCE IS THE ONLY OPTION

THE REHEARSAL IS THE KNOWN IMAGE

THE SPECTATOR TAKES UP THE POSITION


AS WE WISH YOU TO ACT

THE TANKS ARE THE TROPHIES


THE PLAYERS ARE THE WINNERS